Until November 2nd, 2013, Galerie Da-End is presenting for the first time in France the work of Swedish painter and sculptor Markus Åkesson. His magnetic world instantaneously takes you to the heart of the dark nordic forests. His organic sculptures and intense paintings snatch you up and keep on haunting your mind long after you’ve seen them. The following interview with the artist will hopefully give you a few keys to his mesmerising world : 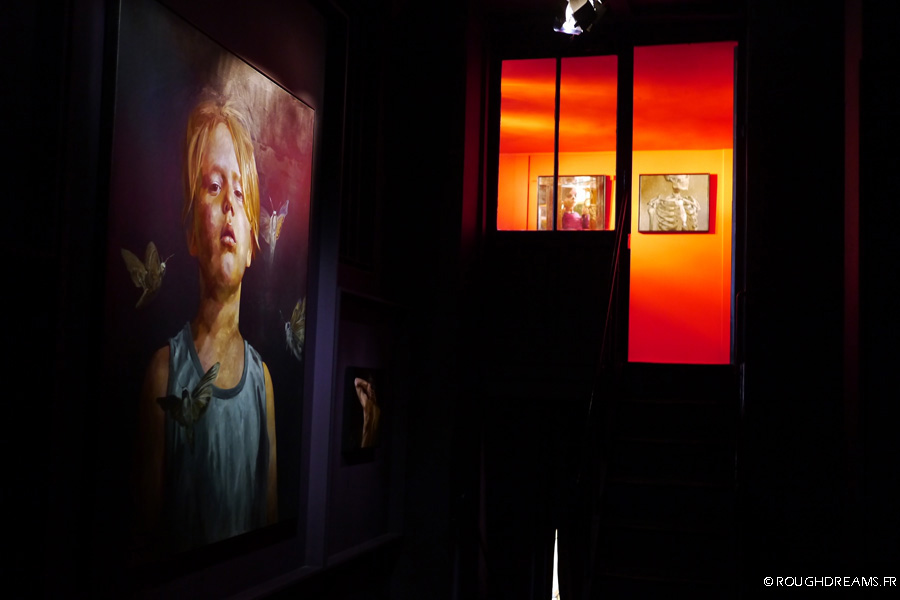 FG : Could you tell us a little about your art background ?

Markus Åkesson : Actually, I had little or no contact with the art world when I was younger. I grew up in a traditional working class family, and didn’t have any friends that were involved in cultural activities. Though I loved to draw, and did so most of the time, it never struck me that being an artist could be an actual “job”. So after school I started to work in a factory, but I felt from the start that this wasn’t my world. Luckily, after a few years, I accidently got a job as a glass engraver, and came in contact with a whole other context, more cultural. I worked with this for a couple of years and I eventually felt that I had to find ways to express myself. Then I started to paint and I knew that I had found my way.

You currently exhibit in Paris two recent series of works called “The Woods” and “Black pond”. Can you explain what they are about?

The Woods is a parallel world, maybe a dream world, or a subconscious space. The stories that take place there are shadows of the “real world”’s events. The changing of states are essential in this world, like the rites of passage and the moments that are in between the dramaturgical highlights in the story. The water surface in the “Black Pond” series represents portals, a thin membrane between spaces, worlds or states (of minds). 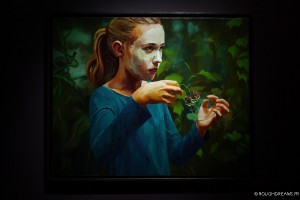 You seem to draw a lot of inspiration from your surroundings. What is nature and the wildlife like in the part of Sweden where you live ?

Sweden has a population density of 21 inhabitants per square kilometre. Småland, where I live, mostly consists of forest. I think it is inevitable as an visual artist to take inspiration from such surroundings. I know places in the woods where you can walk for hours without seeing traces of any human life. It’s a meditative experience and really puts yourself in perspective with nature.

Tell us about your studio : what does it look like ? What can be found in it ?

The studio is situated in an old glasswork, built in 1850, so I have a lot of history around me. In my studio I have some artists books, Jenny Saville, Gerhard Richter, Michael Borremans, John Bauer, Taschen books, etc. I also have some skulls from animals, anatomic models and toy animals. But I’m not a big collector of things.

You paint after photographs that you stage and take. Can you explain the process and tell us more about your models ?

Sometimes I start out with an idea of a symbolic course of events that I want to visualize. I then start to find surroundings and models. Sometimes it’s the other way around, a surrounding or a person triggers an idea of a story. I often use people in my immediate surroundings as models, but sometimes I also rent models. The process is often like a movie set, but in miniature, very basic with just me and the model(s), sometimes an assistant. I take a lot of different photos and then work from a variety of prints.

Almost all of your paintings have one theme in common : the rite of passage, or the “passage” itself, between two worlds, two states of mind, two periods of life. What is it about this theme that fascinates you so much ?

I´m not quite sure. But in a classic dramaturgical setting, you have more or less significant events that bring a story further. In movies, for example, there are actors, simply doing or saying stuff, with more or less drama and the moments in between are “fillouts” that lead to the points where something actually happens. Those “fillouts” have always fascinated me. What would happen if you concentrated your attention to these?

Can you tell us about what your sources of inspiration (both historic and contemporary) – this can be in the art field or any other aspect of culture ?

Actually, words have always been the most important source of inspiration, poems and song lyrics. That is what has the most emotional impact on me, maybe because they give me my own images, which often is the strongest experience, at least for me. The visual references are more on a subconscious level, I see (like all of us) so many images flashing by everyday and of course it affects me but I don’t think about it that much. But yeah, sometimes I almost get knocked out by seeing an artpiece, but then I rarely want the reference in my own work.

You chose Fever Ray’s debut album as your exhibition soundtrack. Is music important to you ? Do you listen to music while painting ?

I often listen to music while I work and I am a big consumer of music. Right now I have the Dark Dark Dark EP ”Bright Bright Bright” on repeat in the studio. It’s brilliant. 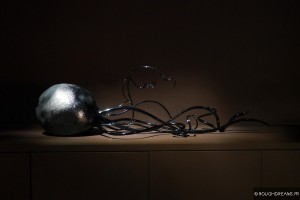 Tell us a little about the four sculptures exhibited in Paris. What do they represent and what are their technical specificities?

Without going in too much on the details, they are hand-blown by a glassblower, Micke Johansson, after my sketches and instructions. After that, they are hand engraved by me, a most time-consuming, but at the same time, meditative work.

For me, there is a big difference between my paintings and my sculptural work in the sense that I see the paintings as something that leads the spectator out from the exhibition room. The canvases are representations of scenes from another world and kind of, illusions. I don’t really think of them as experienced physical objects. The sculptures, however, are real and very much in the room. They are objects that somehow have made the journey from the worlds in the painting into reality.

Finally, what are your future plans ?

I will be at Art Paris Art Fair with Galerie Da-End, Paris in the end of March next year.

Many thanks, Markus! See you in March then!